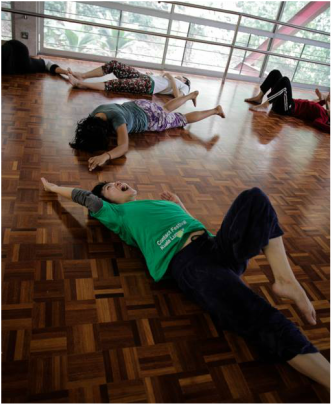 CFKL 2014. Photo by David Lim.
I never thought I was going to be a dancer or filmmaker. Sometimes I'm not sure what either of those mean anyway.

I stepped into a dance class for a university P.E. requirement. I found my way to the Limon Dance School in New York, while dabbling in ballet, hip hop, and a B.A. in Political Science. I completed a Diploma in Dance at the Nanyang Academy of Fine Arts (Singapore) in 2011 and an MA (Contemporary Dance) at the London Contemporary Dance School in 2015. At some point I encountered improvisation, somatics, martial arts, filmmaking, and those kind of exploded my notions of dance and movement.

I make stuff. I make documentary and experimental dance films, live performance and installations as I observe alternate histories, identities and social issues as expressed in the body, movement and art. I'm also an arts journalist, activist, and parent.It's hard to believe that some of my work has received support from and found its way into countries I've never even visited or never dreamed I would visit. I work best in collaboration.

Before dancing, my earliest love was writing - scribbling silly short stories, poems, rants from the age of 10.  More recently as a dance writer I have been published in Arts Equator, Fivelines, the Straits Times, and the Esplanade Offstage.